Doing Conservation: interpreting 'Heritage' as a response to local context

As field-based conservation architects very rarely do we get opportunities to completely carry through our ideas and vision. One such fulfilling project we undertook years ago thanks to a far-sighted pro-active official was the 'Prehistoric Trail' project. It was conceived as a pilot - in the hope that it could be seen as a model for similar interventions in sensitive heritage contexts. We designed interpretation 'kiosks' (as we dubbed them) at select prehistoric sites in Karnataka.

Some photos below that I hope conveys our preference for a 'go-light' over a 'heavy-handed' approach. 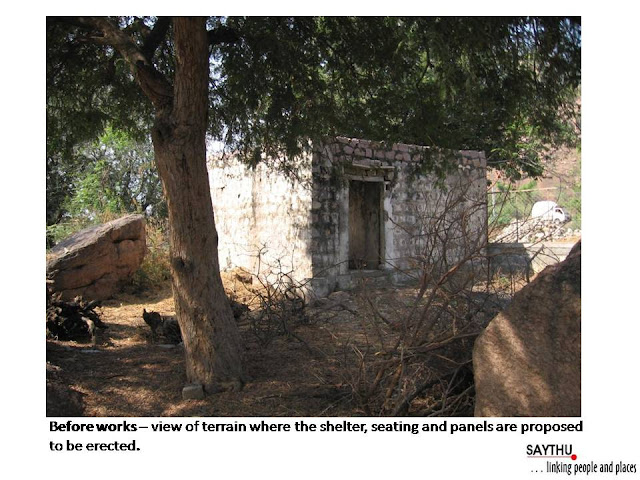 Given the micro climate we were convinced that buildings (i.e. floors, walls, roof defining lockable spaces) were not essential at these locations. So we chose to design 'shelters' instead. 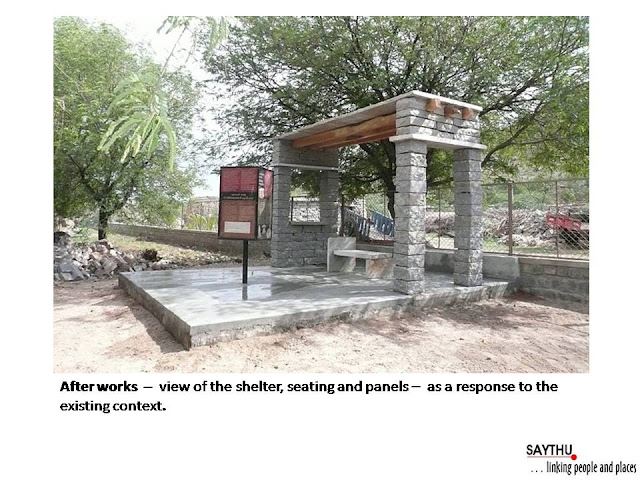 We demolished the existing abandoned material storage shed (seen in the earlier picture above) and reused the stones in our proposal. We also reused the timber beams and stone slabs in the roof. We restricted the footprint of the shelter to the existing plinth and so saved on unnecessary foundation costs as well. 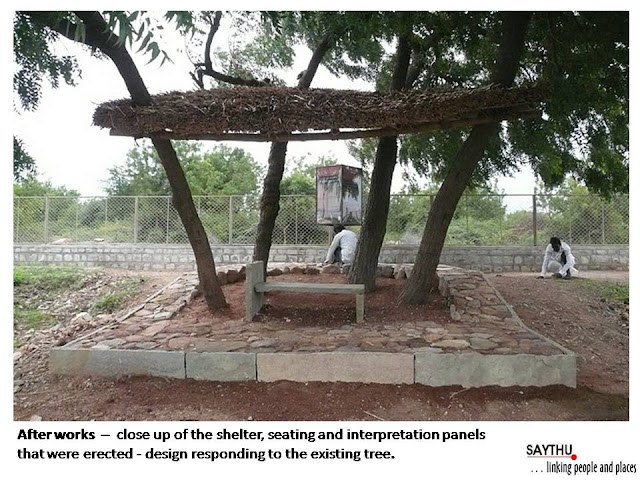 Elsewhere (image above) we wrapped a basic thatch roof shelter around existing neem trees on site. The tree faced the dolmens on site and so we incorporated a stone bench beneath. We engaged thatchers from a nearby village to build the thatch roof. And used existing stones on site (left over from the fencing) for the paving.

The contractor was also interested enough to stay true to our suggestions rather than try and bulk up costs by proposing unnecessary materials. A win win overall.

We managed to install 'shelters' at three locations and had proposed an experimental in-situ preservation technique at a fourth location. But sadly that project didn't come through.
Posted by K Rajangam at 18:38 No comments:

Thinking Conservation: Putting heritage and its conservation in perspective

I decided it would be a good idea to start the blog by addressing the broader idea of heritage and conservation. And looking through my archives I came across the first feature I had written for Sattva (The Alternative). It was part of the guest column I used to write for them called 'pastperfect'. The feature published on 04 Feb 2010 deals with the question of heritage and conservation at a broad level.

Re-reading it if there is one thing I am sure of it is that I wouldn't write it the same way today. But I decided to anyway re-post it, but with comments to note where / how my views have changed. Don't all our ideas and thoughts transform over time? I thought it would be an interesting exercise to record this transformation in some way.

The dictionary defines Conservation as ‘to preserve something’ thus Heritage Conservation is all about preserving our heritage. Here Heritage is considered in the larger context as something that is common to all of us, to society as a whole and not just our individual legacy or inheritance. Thus we can understand the word heritage to signify ‘Cultural Heritage’, where Culture covers pretty much everything from art, literature, our way of life to traditions, values and systems.

(comment: the fact that culture can cover pretty much everything, much like Cultural Heritage, seems to be the source of contentions or problems if you will, on what is understood as heritage, by whom, why, who uses it and how they use it)

Why is cultural heritage so important that we need to preserve it? Of what use is it? William Morris said ‘Art is the one certain solace of labour’. Morris was one of the well-known figures of the Arts and Crafts Movement in England, (a late 19th century movement which arose as a reaction against the ‘evils of industrialisation’ and advocated a return to the tradition of crafts and craftspeople) a socialist writer, philosopher and thinker, known to a far lesser
extent as the father of modern or present day heritage conservation movement.

He founded SPAB, the Society for Protection of Ancient Buildings in England, in 1888 and the principles of this organisation paved the way for the practice of heritage conservation, as we know it. A number of these principles are extremely relevant even today. He said ‘surely any one who professes to think that the question of art and civilisation must go before that of the knife and fork does not understand what art means…it is the province of art to set the
true ideal of a full and reasonable life before him [the workman], a life to which the perception and creation of beauty, the enjoyment of real pleasure that is, shall be felt to be as necessary to man as his daily bread, …’

We can reinterpret what Morris said as follows, cultural heritage which encompasses art, is something that gives identity and meaning to our lives, a purpose and value to it, without it there is no joy or beauty to it.

Morris further distinguished between ‘useless toil’ and ‘useful work’, defining the former as one that carries no hope and the latter as one full of hope. He considered labour essential to all humankind and felt one must get pleasure out of one’s ability to create something; he called such work ‘useful’ and considered that it exercised not just the body but also the mind and soul. He further stated that memory and imagination would help one while engaged in
useful work, ‘not just one’s own thoughts but thoughts of men of past ages would guide our hands’ and thus help us create something.

(comment: Re-reading the above paras now it seems like 7-8 years ago I felt art and heritage were idealistic / spiritual and somehow opposed to the material things in life. But I didnt meant to write that way. Maybe I drew on Morris because the heritage conservation movement in India grew out of English movements like SPAB...Today I would consider Morris's writings both 'romantic and idealistic')

His vision may have been idealistic but we can reinterpret his sayings to mean that an awareness of the past and hope for the future is what carries us through existence. This awareness makes us unique; humans are the only living things with consciousness. Thus if we wipe out our past, we remove not just hope for our future but also our awareness and our very consciousness.

(comment: Now I definitely wouldn't say 'humans are the only living things with consciousness')

Lets take an example, when we visit an alien place do we not first look for something familiar to us? This could be someone from the same place, food or style of dressing we can relate to, language similar to ours ... Why do we seek this familiarity? because it makes us feel more comfortable, it gives us an assurance that we are no longer in a completely unknown situation. These familiar things or people give us a sense of belonging, which is extremely important for our well-being. What then would we identify with if we remove all
familiar things?

Do we not want to pass on a legacy to our progeny? If we do not have any traditions, values or customs left what do we pass onto them? What do they learn from? Who do they look up to? This is the role of Heritage Conservation – to help us hand on our past, along with our present interpretation of it onto a future.

(comment: sounds pompous now or rather sounds like I want Heritage Conservation to take on a large central role. Today I have made peace with the fact that it is a minor concern that is of concern only to a minority.

And building on the work of some scholars whose writings I appreciate, I would rewrite the role of conservation as "to help hand on an imagined past onto an imagined future")

This may seem fairly straightforward but the problem however is that anything to do with heritage conservation is seen to be anti development which couldn’t be more wrong. Conservation is a process, the means to an end and not an end in itself. All it tries to do is ensure that development, which is inevitable, is carried out in a sensitive and informed manner such that we do not destroy what we value and retain it for our benefit and for the benefit of future generations.

(comment: Over the years I keep wavering over how best to summarise the conservation process - is it "managing change" or "managing continuity" - my thoughts swing back and forth between both. Maybe conservation would like to manage continuity but all it can hope for is to manage or even just mitigate change?)

However this central theme appears to have been sidetracked along the way till we have reached a point where we have turned ‘history into inconsequent nonsense, and made art a collection of the curiosities of the past which have no serious relation to the life of the present’ (Morris).

This is probably one of the main reasons for a disconnect between heritage and society or rather people. How then do we link the two? How do we decide which part of the past to preserve and for whose future? We shall look into these aspects over the coming weeks.

(Comment: I have been "looking into these aspects" for a decade now and all I have are more questions and doubts...)