Doing Conservation: the importance of stepping back to understand ‘context' and 'setting' while conserving heritage structures

Most often while assessing the condition of heritage buildings one is on a quest to find solutions for problems that have resulted in the building's distressed condition. And as we advise students, interns or junior architects, the right way to undertake this quest is NOT by looking at the problem in isolation but in light of the overall structure. For example, what we see as visible signs of damage for e.g. cracks in a wall or plant growth are typically just the ‘problem’. It is not enough to solve this by stitching the crack or removing the plants as the 'problem' may reappear. It is more important to find the ‘root cause’ in order to arrive at an appropriate long-term solution. Such an approach extends to the 'setting' or 'context' of the structure as well. Let us take the example of reviving built water features within a heritage complex. This could be a kund, tank, step well or simply a well. A fairly straightforward solution could be restoring or strengthening walls and desilting the water feature. But is that sufficient?


For example, years ago I was called to assess the condition of a step well at Someswara temple in Lakshmeswar, Karnataka. The plan was to conserve the structure, which I interpreted as not only restoring the actual structure but also reviving its function by recharging the well. I argued that conserving the step well was not a fairly straightforward exercise of dismantling and reconstructing the bulged out walls. Speaking to local people I understood that when water level in the nearby Hulikere(tank) raises, the step-well automatically recharges (possibly through underground aquifers). So would the conservation solution be revitalizing Hulikere tank or going one step further to suggest that that the entire water catchment area of Hulikere tank needs managing?

In the field this is often where we feel the limits of our professional boundaries in suggesting and promoting such a solution. And so we advocate an interdisciplinary approach to conservation. 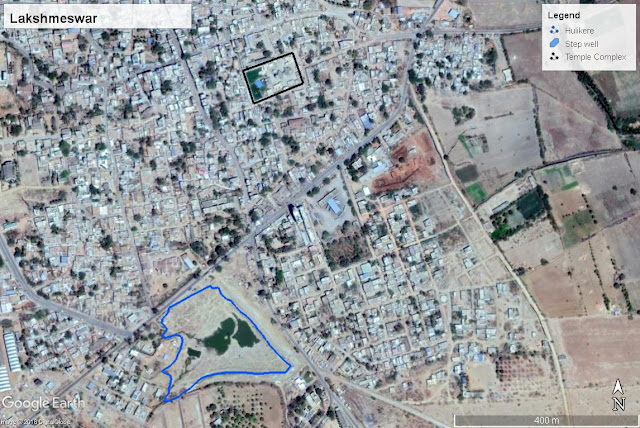 A similar example was in the case of the potable water channel for the public kitchens of the Virupaksha temple complex at Hampi World Heritage Site. There was some discussion on how best to maintain the water inlet to not just ensure clean but also continuous flow of water.

As we retraced our steps to figure out how water entered and left the kitchen channel we realized that - water was flowing into the kitchen channel from an upstream source of river Tungabhadra through channels that cut across valleys, through rocky terrain on rock cut channels, controlled effectively at inspection chambers before finally flowing into the kitchen and back to the river Tungabhadra further downstream. Hence in this case the solution was not as straightforward as cleaning or resetting the water channel within that structure. In fact such an approach may have disturbed the integrity of a 500 year old ‘living’ network. (For more information on this unique network read 'Irrigation systems under Vijayanagara Empire' by C T M Kotraiah, Dept of Archaeology and Museums, Mysore, 1995). 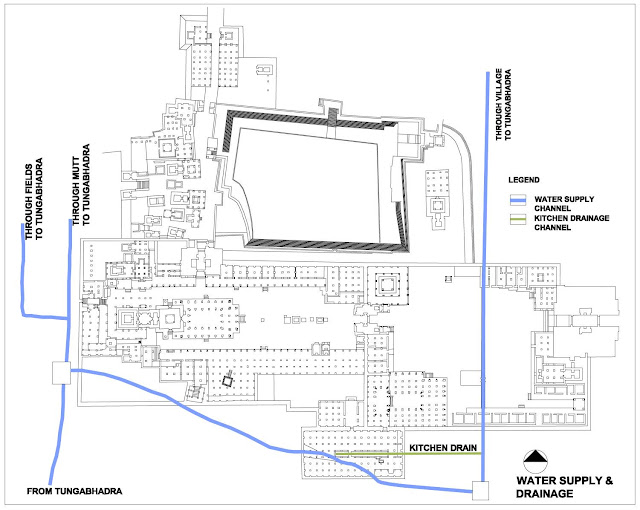 
At that point of time we were amazed over how a 500 year old water supply network was still functional at most locations on a site that was largely visible as ruins and archaeological remains. For example, at the public bath, Queens bath and octagonal bath structures, water does not stagnate but still drains out after every rain. Where does it go? These examples speak for themselves, by pointing to an important fact - that what we see today as structures or monuments do not exist in isolation but are part of a larger network.
Posted by Kuili Suganya at 14:25 No comments: